WASHINGTON (AP) — Republicans on Capitol Hill frantically searched on Tuesday for ways to end the Trump administration’s policy of separating families after illegal border crossings, with the focus shifting on a new plan to keep children in detention longer than now permitted — but with their parents.

House GOP leaders are revising their legislation amid a public outcry over President Donald Trump’s “zero tolerance” approach to illegal crossings. The change would loosen rules that now limit the amount of time minors can be held to 20 days, according to a GOP source familiar with the measure. Instead, the children could be detained with their parents for extended periods.

The revised bill would also give Department of Homeland Security the authority to use $7 billion in border technology funding to pay for family detention centers, the person said. Expanded facilities could be key, as migrant children separated from their parents are currently housed by a different department, Health and Human Services.

The person providing the information on the proposal was not authorized to do so by name and commented only on condition of anonymity.

In the Senate, meanwhile, Republicans are rallying behind narrow legislation that would allow detained families to stay together while expediting their deportation proceedings.

Pres. Donald Trump says he currently has only two options on immigration: Separating migrant children from their parents at the border or “open borders.” He says he’s requesting Congress allow officials to detain children and parents together. (June 19)

The second-ranking Republican, John Cornyn of Texas, said they’re proposing a “humane, safe and secure family facility” where parents and minor children could be detained together. He said families would move to the head of the line for processing.

Senate Majority Leader Mitch McConnell, R-Ky., told reporters that all Senate Republicans are supporting the plan. He said he’s reaching out to Democrats for bipartisan backing, since the proposal would need to reach a 60-vote threshold for approval in the Senate.

But Senate Democratic leader Chuck Schumer of New York signaled that no such support would be coming, saying it’s already in Trump’s power to keep the families together.

Republicans were scrambling to update their approach ahead of a visit from Trump, who called earlier in the day for Congress to approve what he called a third option to address the family separations.

“So what I’m asking Congress to do is to give us a third option, which we have been requesting since last year, the legal authority to detain and promptly remove families together as a unit,” Trump said Tuesday. “We have to be able to do this. This is the only solution to the border crisis.”

Trump’s meeting at the Capitol comes as lawmakers in both parties are up in arms after days of news reports showing images of children being held at border facilities in cages and an audio recording of a young child pleading for his “Papa.”

The issue boiled over Tuesday at a House hearing on an unrelated subject when protesters with babies briefly shut down proceedings.

Maryland Rep. Elijah Cummings, the top Democrat on the House Oversight and Government Reform Committee, pleaded with Republicans on the panel to end what he called “internment camps.”

“We need you, those children need you —and I am talking directly to my Republican colleagues— we need you to stand up to President Donald Trump,” he said.

Under the current policy, all unlawful crossings are referred for prosecution — a process that moves adults to the custody of the U.S. Marshals Service and sends many children to facilities run by the Department of Health and Human Services. Under the Obama administration, such families were usually referred for civil deportation proceedings, not requiring separation.

More than 2,300 minors were separated from their children at the border from May 5 through June 9, according to the Department of Homeland Security.

The national outcry over the separations has roiled midterm election campaigns, emboldening Democrats while putting Republicans on the defensive.

Top conservatives, including key Trump allies, have introduced bills to keep the migrant families together. Sen. Ted Cruz of Texas introduced legislation that the White House said it was reviewing, and Rep. Mark Meadows of North Carolina, a leader of the conservative Freedom Caucus, also introduced a measure.

“While cases are pending, families should stay together,” tweeted Cruz, who is in an unexpectedly tough re-election battle. He introduced his own bill to speed up court proceedings to no more than 14 days. “Children belong with their families,” he said.

Both bills seemed to be longshots. “This becomes a backup proposal,” Meadows told reporters at the White House.

The Trump administration insists the family separations are required under the law. But after signaling Monday that it would oppose any fix aimed solely at addressing that issue, the White House said Tuesday it was reviewing the emergency legislation being introduced by Cruz to keep migrant families together.

The senator’s bill would add more federal immigration judges, authorize new temporary shelters to house migrant families, speed the processing of asylum cases and require that families that cross the border illegally be kept together, absent criminal conduct or threats to the welfare of any children.

The two immigration bills under consideration in the House could address the separations, but the outlook for passage is dim. Conservatives say the compromise legislation that GOP leaders helped negotiate with moderates is inadequate.

Rep. Jim Jordan, R-Ohio, a member of the Freedom Caucus, said he’s skeptical that even a full-throated endorsement from Trump will be enough to get the compromise bill through the House.

The compromise bill in the House shifts away from the nation’s longtime preference for family immigration to a new system that prioritizes entry based on merits and skills. It beefs up border security, clamps down on illegal entries and reinforces other immigration laws.

To address the rise of families being separated at the border, the measure proposes keeping children in detention with their parents, undoing 2-decade-old rules that limit the time minors can be held in custody. 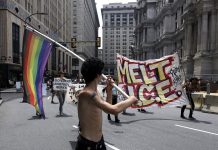 Occupy ICE Misguided, But Do They Have A Point?

Trump gets his wish as House GOP ousts his critic Liz...

House passes the most sweeping voting rights bill since the 1960s...