The Jacksonville, Florida (AP) The Jacksonville Sheriff’s Office said there was a mass shooting with multiple fatalities at a downtown shopping-dining complex on Sunday and urged people to stay far away from the area.

“Mass shooting at the Jacksonville Landing. Stay far away from the area. The area is not safe at this time. STAY AWAY #TheLandingMassShooting,” the Jacksonville Sheriff’s Office said on Twitter.
The shooting occurred during a qualifying event for the Madden 19 Tournament at the GLHF Game Bar, according to the Twitter of CompLexity Gaming, one of the gaming teams. One Madden participant, Young Drini, was grazed in the hand and is away from the scene and safe, Complexity said.
On an online stream of the Madden event posted to the website Twitch, several loud gunshots can be heard and the game abruptly stops.
Federal law enforcement officials are monitoring the situation in Jacksonville. The Bureau of Alcohol, Tobacco, Firearms and Explosives (ATF) is responding to the scene in Jacksonville Landing, a law enforcement source told the AP and CNN.
The Jacksonville Landing is an open-air marketplace with stores, bars and restaurants in downtown Jacksonville along the St. Johns River.
VIDEO FROM WJXT 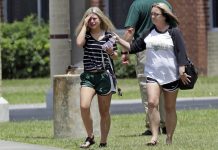 Texas High School Deals With Yet Another Mass Shooting 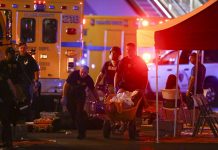