The Florida House took up the controversial the Marjory Stoneman Douglas High School Public Safety Act a day after it narrowly passed the Senate. It was a very emotional, loud and at times angry day Tuesday that saw very little get done. That means today with the state, the nation and the world watching the House needs to make up for lost time if they hope to end this legislative session on time come Friday.

The House was not the only spot in Tallahassee that saw drama on Tuesday, lawmakers got a full view of the debate being waged by the anti-gun and pro-gun sides. Student protesters staged a “die-in” at the Capitol and held signs that said “no armed teachers.”

The parents of two of Parkland’s victims returned to the Capitol to plead for passage. While behind the scenes the NRA kept up its pressure making sure that lawmakers knew they were clear on what they would accept and not accept in any bill put forth in the House.

The Senate bill includes increased funding for gun and school safety and for mental health resources. It also establishes the Marshal program, which would allow school personnel to receive law enforcement training and carry a concealed weapon on campus.

It is the controversial Marshall program that has Florida lawmakers at odds with each other and their constituents. House members spent nearly three hours asking questions about the legislation, which would put some restrictions on rifle sales, provide new mental health programs from schools and improve communication between school districts, law enforcement, and state agencies.

The House continues to fight over two issues where it seems lawmakers in Tallahassee seem to be out of step with the majority of Floridians. The area of banning assault rifles and the arming of teachers as part of the Marshall program, which in the House is called the Guardian program.

Two major polls released last week showed that Floridians were strongly in favor of the banning of assault style weapons with an average of over 58 percent supporting the move to do away will the selling of the guns. While over 65 percent of those polled in the Sunshine State did not want teachers armed in any way.

But the House started today’s session by dismissing any idea of banning assault weapons, while debating how a Guardian program might work. Amendments flew by faster than NASCAR’s at Daytona, the first of which would have stripped language from that bill that would create a program to arm some teachers and school employees who have undergone law enforcement training. Several Democrats said they wouldn’t vote for the bill if it included the so-called Guardian program, which would put more guns in schools.

“So what do we have before us today? A proposal that arms teachers and does not ban military-style assault weapons,” Smith said. “This is why people are so fed up with politics.”

Another hotly debated part of the bill included a number of black lawmakers expressing concern that African-American students would be more likely to be accidentally shot by a school employee.

Proving how heated the debate was over the issue Republican Rep. Elizabeth Porter lashed back at that idea.

“I’ve heard that all of a sudden the folks that have been proponents of teachers all these years are saying that teachers are now incompetent … they’re racist, they’re bigoted, they’re going to target black boys and brown boys. I don’t think that’s our teachers at all,” Porter said.

Porter took a great deal of heat from fellow lawmakers who suggested that lawmakers need to listen to the students from Stoneman Douglas students who took buses to Tallahassee and lobbied for gun safety legislation.

The bill is a long way from being complete and there is opposition from some that moving the age to buy guns from 18 to 21 is a problem that would keep them voting for the bill. At this point there is little hope of finding much Democratic support and the amendments keep on coming.

Another wild card is would Gov. Rick Scott actually veto a bill that had teachers involved in helping to police schools? He has been a vocal opponent of that measure. But there is a long way to go before anything hits his desk. 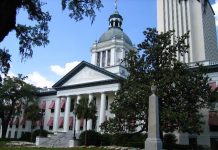 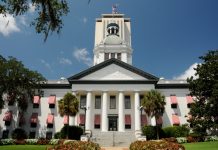