WASHINGTON (AP) — Supreme Court justices seemed troubled Tuesday by the arrest of a Florida man during a city council meeting in Florida, an arrest he says was retaliation for being an outspoken critic of the city.

The justices were hearing arguments in a case brought by Fane Lozman over his arrest at a 2006 city council meeting in south Florida’s City of Riviera Beach. Lozman was arrested after he began using the meeting’s public comment time to talk about government corruption in the county and kept speaking after a member of the council warned him not to continue with the topic. The charges against him were ultimately dropped, but Lozman then turned around and sued the city.

Lozman claimed the city violated the First Amendment’s free speech guarantee by arresting him in retaliation for his criticism of city officials and policies and a separate lawsuit he’d filed against the city. A lower court ruled that because a jury found a police officer had probable cause to arrest Lozman for disturbing a lawful assembly, he couldn’t bring a retaliation claim.

Chief Justice John Roberts said he found video of Lozman’s arrest “pretty chilling.” He said Lozman appeared to speak in a very calm voice for about 15 seconds and then “the next thing he knows, he’s being led off in … handcuffs.”

“Now the council may not have liked what he was talking about, but that doesn’t mean they get to cuff him,” Roberts said.

“He started by saying there’s been an arrest for corruption, which was true. And then he tried to say, ‘And I’ve been telling you that other people are corrupt,’” she said. “Why is that off topic?”

Shay Dvoretzky, arguing on behalf of the City of Riviera Beach, said Lozman’s comments were not about the city but the county it is part of, Palm Beach County.

Justice Elena Kagan also seemed sympathetic to Lozman, telling Dvoretzky that he “might have some difficulty with the facts of your case.”

Arguing on Lozman’s behalf, Stanford law professor Pamela S. Karlan, asked that the court to rule that the existence of probable cause to arrest Lozman not be an absolute bar to his retaliatory arrest lawsuit.

The case is notable for being the second time a case involving Lozman, 56, has been in front of the justices. In the first case, Lozman won a landmark ruling against the city that a floating home he had docked at a Riviera Beach marina was a house, not a boat subject to easier government seizure under laws that govern ships and boats. 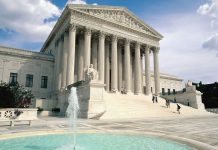