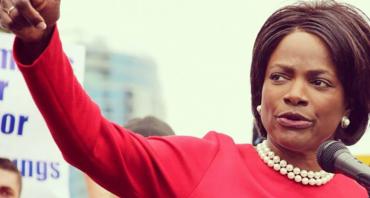 Now starting her second term in Congress, U.S. Rep. Val Demings, D-Fla., landed a post to help her party protect its new majority in the U.S. House while she ramps up her criticism of President Donald Trump.

This week, U.S. Rep. Cheri Bustos, D-Ill., the chairwoman of the Democratic Congressional Campaign Committee (DCCC), tapped Demings to serve alongside U.S. Rep. Pete Aguilar, D-Calif., and U.S. Rep. Donald McEachin, D-Va., to lead the DCCC’s Recruitment Committee as they look ahead to the 2020 elections.

“In this role, they will work to make sure Democrats elevate the next generation of diverse leaders to expand our Democratic House majority,” the DCCC noted. While Demings will be focusing on looking to recruit candidates to run for seats currently held by the GOP, the DCCC stressed the need to defend more than 60 congressional freshmen which will be the responsibilities of U.S. Rep. Ami Bera, D-Calif., U.S. Rep. Suzan DelBene, D-Wash., and U.S. Rep. Brad Schneider, D-Ill.

“The best defense is a good offense and, at the DCCC, we are going to take the fight to Washington Republicans who have turned their backs on the needs of hardworking families across our nation,” Bustos said on Wednesday. “We won this majority by working together, and that’s how we’ll grow it in 2020. I’m extremely proud to announce Reps. Pete Aguilar, Val Demings, Donald McEachin, Ami Bera, Suzan DelBene and Brad Schneider are stepping up into senior leadership positions at the DCCC so we can lock down and grow our new Democratic Majority. They know what it takes to win tough races, and I am humbled to have their voices at the DCCC’s leadership table.”

In the meantime, Demings is increasingly taking aim at Trump. Demings came out swinging at Trump after his prime time address on immigration this week.

“While the government remains shut down and hundreds of thousands of American families worry about making ends meet without a paycheck, President Trump tonight offered nothing new, only more fear-mongering and the continuation of a self-inflicted crisis,” Demings said after Trump’s speech on Tuesday night. “The only crisis on the border is the one that President Trump has created by falsifying reports to instill fear, imprisoning children and separating families, and failing to hire enough officers to staff ports of entry.

“The president couldn’t get Mexico to pay for his wall. He couldn’t get Congress to pick the pockets of the American people. The GOP, which could have passed wall funding at any time over the past two years, knew it was an unreasonable idea,” she added. “Congress has already agreed on a bipartisan deal to fund the government. President Trump rejected it, opting to govern by temper tantrum. It’s time for the president to stop holding the American people hostage. Families deserve real bipartisan solutions to get our country working again.”

From her perch on the U.S. House Homeland Security Committee, this week Demings said the federal shutdown–which she blamed on Trump–was undermining public safety.

“Ports of entry like our airports are the number one target for terrorists and drug traffickers. This Friday, President Trump’s government shutdown will mean that the TSA officers who keep us safe won’t get paid. That’s unfair, unsafe, and short-sighted,” Demings said on Tuesday before pointing to her own experiences in law enforcement.

“I was commander of the Orlando Police Airport Division at Orlando International Airport during the 9/11 attacks and know firsthand how important airport security is. I’m dumbfounded that President Trump, in the name of ‘security,’ will force our TSA officers to work without pay,” Demings added.  “This Friday the TSA officers who keep our airports and airplanes safe will miss their first paychecks. Have we already forgotten the lessons of 9/11? The Trump Shutdown has never been about ‘security.’ After the 9/11 attacks, Congress created a passenger security fee to help fund the TSA, but it’s not being used. Now, the Trump administration—which has diverted other fees to pay for parks and the IRS—won’t do the same to keep our airports and travelers safe. Pay our TSA officers!”

While she has been in Congress for barely more than two years, Demings has increasingly been showcased by her party.  In the summer of 2017, she was selected to serve on Democrats’ new “Congressional Task Force on Election Security” which was to “focus on how to bolster the security of election infrastructure ahead of the 2018 election” and “be a forum for members of Congress to hear from election infrastructure experts on both physical security and cybersecurity challenges and identify actions that should be taken to help ensure the integrity of our election systems and guard against future attacks.” The task force did not include a single member of the GOP which, at the time, controlled the House.

With her background in law enforcement, including more than 25 years service with the Orlando Police Department (OPD), Demings has increasingly becoming a favorite of Democrats at the national level. From 2007 through 2011, when she retired, Demings served as chief of the OPD. Back in 2012, Demings offered U.S. Rep. Dan Webster, R-Fla., a surprisingly close race. After the latest round of congressional redistricting, the district became far more palatable for Democrats. Webster packed his bags to run for an open seat up north while, despite some respectable opposition in the primary, Demings ran over her rivals to win his old seat. Demings did not face any opposition in last year’s general election.

In her brief congressional career, Demings has been given some high profile assignments for a backbencher freshman in the minority party, including taking aim at the White House on immigration and health-care and focusing on national security issues. When she started her service in Congress in January 2017, Demings had a ceremonial swearing in ceremony in Orlando with some high profile Democrats in attendance. Then U.S. House Minority Leader and now U.S. House Speaker Nancy Pelosi, D-Calif., swore Demings in and then U.S. Sen. Bill Nelson, D-Fla., and Orlando Mayor Buddy Dyer attended the event. Demings is married to Orange County Mayor Jerry Demings.

Bipartisan deal reached on border security. Now it is up to Trump to keep the government open

Trump Supporter Sen. Lindsey Graham Says It Is Time For The President To End The Shutdown