Republican infighting could damage the Party beyond the 2018 Midterms

Beware of swallowing every drop of political bellywash you’re fed in these ruthless pre-election days. Consider the Congressional District 7 Republican primary as a case in point.

I understand we Republicans have a party split the size of the Grand Canyon, but this is a particularly onerous campaign smear in the CD 7 race and I’d like to set the record straight.

The GOP primary pits tea-party-backed Scott Sturgill against conservative Mike Miller, state representative since 2014 for the 47th District, which includes Belle Isle, Edgewood, Orlando, and Winter Park in central Orange County. (The teas don’t call Miller conservative. They call him “establishment,” if they’re not calling him “RINO” or “Liberal Mike.”)

The Sturgill camp is stoked by the fire of Jacob Engels’ online Central Florida Post, which writes, “Miller and his allies have been relentlessly touting the backing of a RINO deep state group calling themselves the ‘Republican Main Street Partnership.'”

Sturgill’s campaign produced a mailer (displayed on this page) that plays off Engels’ story. It basically says Miller is going around pretending he’s not liberal.  It would have you believe uber-liberal billionaire George Soros is funding the Republican Main Street Partnership (RMSP), which has embraced Miller. Like Engels, Sturgill’s contention in the mailer is that Miller is George Soros’ puppet.

Engels quotes a Michelle Malkin column from 2014 — repurposed from another one she wrote in 2005. “‘What do George Soros, labor unions and money-grubbing former GOP representative Steven LaTourette all have in common? They’re control freaks. They’re power hounds. They’re united against tea-party conservatives. And they have all operated under the umbrella of D.C. groups masquerading as ‘Main Street’ Republicans.'”

This is too serious to let slide and why I want to set the record straight.

Sturgill’s campaign mailer talks about a $50,000 campaign donation Soros made to Main Street Partnership. Yes, Soros did make such a donation. The money was sent to the “Main Street Individual Fund,” which, by the way, was in its sunset days and hasn’t operated since 2005. What you don’t hear from Sturgill or Engels or at the least clarified by Malkin is, that donation was made in 2004. More important, the group returned the check immediately. No discussion. No regrets. They sent it back.

“When we recognized what it was, it was like we’d just picked up a condom on the beach,” said a former aide, who recounted the now-14-year-old incident. “We couldn’t get it out of our hands fast enough.” 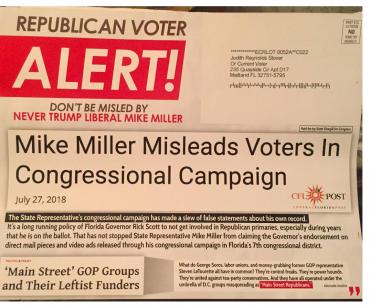 Engels told me Wednesday he doesn’t buy it: “They only sent the check back because they got caught.”

The unrepentant editor was insistent: “My reporting on Mike Miller’s connection to a Soros-funded Never-Trump establishment GOP group is sound. … If he wants to align with the John McCains, Susan Collinses and Charlie Crist-type Republicans … that’s his choice. Main Street Republicans worked to knee-cap the tea party and conservative members of Congress. Shameful.”

Sorry, Jacob, but I’ve always had a lot of respect for Republican Main Street Partnership. It’s transparent, fiercely proud of the candidates it endorses and committed to advancing positive policies and solutions that have tangible effects on American families. Main Street is dedicated to electing and defending legislators who will govern effectively in the Republican tradition. It is comprised of more than 70 members of Congress, in the U.S. House and Senate — all solutions-oriented, fiscal realists and defenders of national security.

This is a bad thing?

It just seems a little sad to me to see one branch of the party trying to skewer the other when the future of the country is at stake. Comparing the RMSP to Nazis and presenting it as some dark, shifty operation on the take from George Soros?

Sad, too, to have Steven LaTourette (whose name was misspelled in the mailer) dragged through the mud.  The mailer’s author wrote about him in the present tense, apparently unaware he had passed away from pancreatic cancer in 2016. This is what I know about LaTourette: As the president of Main Street in the 2014 election cycle, he helped Republicans secure their biggest majority in the U.S. House since World War II.

Sarah Chamberlain, RMSP president and CEO, believes voters will be able to measure the truth.

Reach Nancy Smith at nsmith@sunshinestatenews.com and follow me onTwitter: @NancyLBSmith

Ron DeSantis Has a President’s Hand on His Shoulder