WIMAUMA, Fla. (AP) — A man riding a motorcycle hit an alligator that was crossing a rural Florida road, throwing him from his bike.

The Florida Highway Patrol said in a news release that 27-year-old Calun Nelson was riding his motorcycle south of Tampa early Friday when he saw the more than 10-foot (3.05-meter) alligator crossing the road in front of him. He tried to avoid the gator, but couldn’t.

Troopers say Nelson was taken to a Tampa hospital with serious injuries.

It’s the second accident this week in Florida involving an alligator. On Tuesday a driver on Interstate 75 escaped serious injury when she hit an alligator near Sarasota. 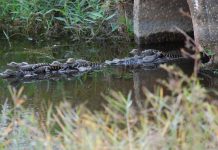