Republican pollster and political pundit Frank Luntz will serve as moderator for the first showcase event of the 2018 GOP political season. The conservative action group Florida Family Policy Council will be sponsoring a meet your next governor forum in Orlando on May 5th and as of today the two candidates scheduled to be there are Adam Putnam and Ron DeSantis.

Speaker of the Florida House of Representatives, Richard Corcoran, who is expected to make a run is welcome to show up if and when he makes an announcement he is in the race.

“Republicans have a very strong and impressive bench of candidates in the race for Florida’s next governor, which makes choosing the best candidate even more challenging. This forum will help educate primary voters to crystallize this important decision,” said Florida Family Policy Council President John Stemberger.

Putnam, Florida commissioner of agriculture, was the odds-on favorite to capture the Republican nomination six months ago and he remains the man to beat. But the party has moved much further to the right opening the race for U.S. Congressman Ron DeSantis, who has strong support from President Donald Trump.

Speaker Corcoran is also father to the right than is Putman who has strong conservative credentials but is more moderate than his rivals. Just a few days ago on April 8th the Palm Beach County Trump Club hosted a get together in West Palm Beach with a crowd of over 600 people. The only invited guest to the event was Congressman DeSantis, no invitations went out to either Putnam or Corcoran.

This is a problem for Putnam as Trump clubs began popping up around Florida in 2017. They came into being only after The Republican Party of Florida gave the groups the go ahead.

The reason this is a problem for Putnam is that the Florida Trump backers are not happy with the states GOP establishment. That means they want to turn out only for Republican candidates in the 2018 midterm elections that are 100 percent in line with President Trump.

The governor’s race in Florida is expected to be one of the most competitive and costly races in the country.

Gwen Graham Says Legal Abortion In Florida Is In “Peril” 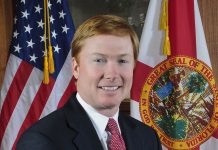 Interview with Adam Putnam: Making Florida a ‘Launch Pad for the American Dream’