By SUNSHINE STATE NEWS
Gov. Scott set the tone for a spirited night in Orlando for the Republican Party of Florida on Saturday, as the RPOF hosted its largest fundraiser of the year, the 2018 Victory Dinner at Disney’s Grand Floridian Resort & Spa.

The Victory Dinner brought together some 600 enthusiastic donors and influential grassroots leaders from across the state.

“Tonight, the energy in this room is noticeable, and because of this excitement and your steadfast leadership, our state will crush the supposed ‘blue wave’ on November 6,” said RPOF Chairman Blaise Ingoglia. “As our Party’s largest fundraiser, this Victory Dinner marks 38 days until we deliver a stunning blow to the most radical and corrupt ticket in our state’s political history.” 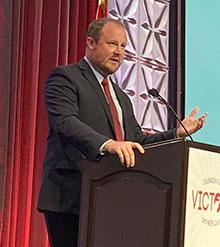 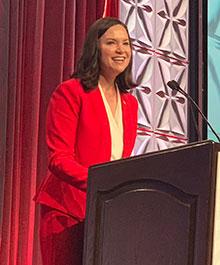 Scott emphasized the Party’s optimistic and powerful message to a room of key leaders within the GOP, saying, “Over the past seven and a half years, we’ve worked hard to make Florida a place where every child can succeed, no matter how they grow up.  We’ve cut taxes, slashed government waste, reduced burdensome regulations, and created an economy that brings more opportunities to Florida families. This election gives Floridians the opportunity to keep this success going strong and let the politicians in Washington know that we don’t work for them — they work for us. Together, we can reform the tired, dysfunctional ways of D.C. and finally ‘Make Washington Work.’” 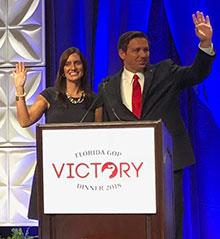 “This election is so important for our state, and the stakes couldn’t be higher,” he said. “Over the past eight years, under Governor Scott’s leadership, we’ve created 1.6 million private-sector jobs, cut taxes 75 times, and our unemployment rate is down to 3.7 percent. Our now-$1 trillion economy is booming, but we’ve got to build on that success, and that’s exactly what I’m going to do as governor.”

DeSantis went on to stress, “I will also fight to keep our communities safe, ensure that all of our students have access to a world-class education, protect our environment, and expand opportunities so that every Floridian can succeed.  We have seen incredible support and great energy so far in our campaign. Now, let’s keep the momentum going so that we have a big win in November.”

The room erupted in cheers from the Party’s base when Ingoglia spoke of “a battleground state of Florida” and its importance in this year’s midterm elections.

“There is a stark contrast this midterm election between a Republican Party seeking prosperity for Florida, and a Democrat Party looking to reverse our progress. It is time to rally in order to retain the governor’s mansion, add a seat in the U.S. Senate and continue to lead our great state with strong conservative values,” Ingoglia said. “Let’s bring this home on November 6.”