As we have been told for months now, this is the most important election of our lifetime which, by my measurement, makes for the 10th consecutive time since the new millennium that this has been the case. As the social matrix of the country has become deeply emotional about the political landscape, it’s possible I was in a ground-zero location for the election.

While many across the country have irrationally invested themselves in what goes on in Washington and Tallahassee, for Parkland residents the interest in, and the stakes invested, are vastly more personal. More than “I don’t like,” or “He doesn’t represent me,” the interest in election results carry an undertow. I witnessed firsthand the deep-seated interest a community has in voting tallies.

When following the returns at an organized event literally in the shadow of Marjory Stoneman Douglas High School, you don’t see the irrational overreactions from the general populace. Shirts, wristbands and wide-eyed shared expressions tell you that this is not generic electioneering — this is a community with a vested interest in what transpired after submitting your ballot. From the Senate race all the way down to commissioner seats, this is a town that feels the gravity of the returns.

It is not a common sight to have high schoolers and parents intermixed during an election watch atmosphere, but since Feb. 14 common is not such a disposable term here. The staff has MSD Strong shirts, and there are a number of local activist groups represented. “March For Our Lives” shirts abound. “Change The Ref” and “Orange Ribbons For Jaime” were also present. Most everyone here has his or her chosen group, but everyone was on the same side.

David Hogg and Emma Gonzales — two of the Feb. 14 MSDHS survivors — were on site, but the crowd reaction to them was one not of celebrity, but of family. The collection of electronic media was the only indicator they were apart in any way from the gathered crowd. Hugs and muted conversations were the norm. But it was clear the gathering had a shared expectation. As early returns came in favoring the various Democratic names — Sen. Bill Nelson, gubernatorial candidate Andrew Gillum, and various House candidates — the house was loud with hopeful excitement. 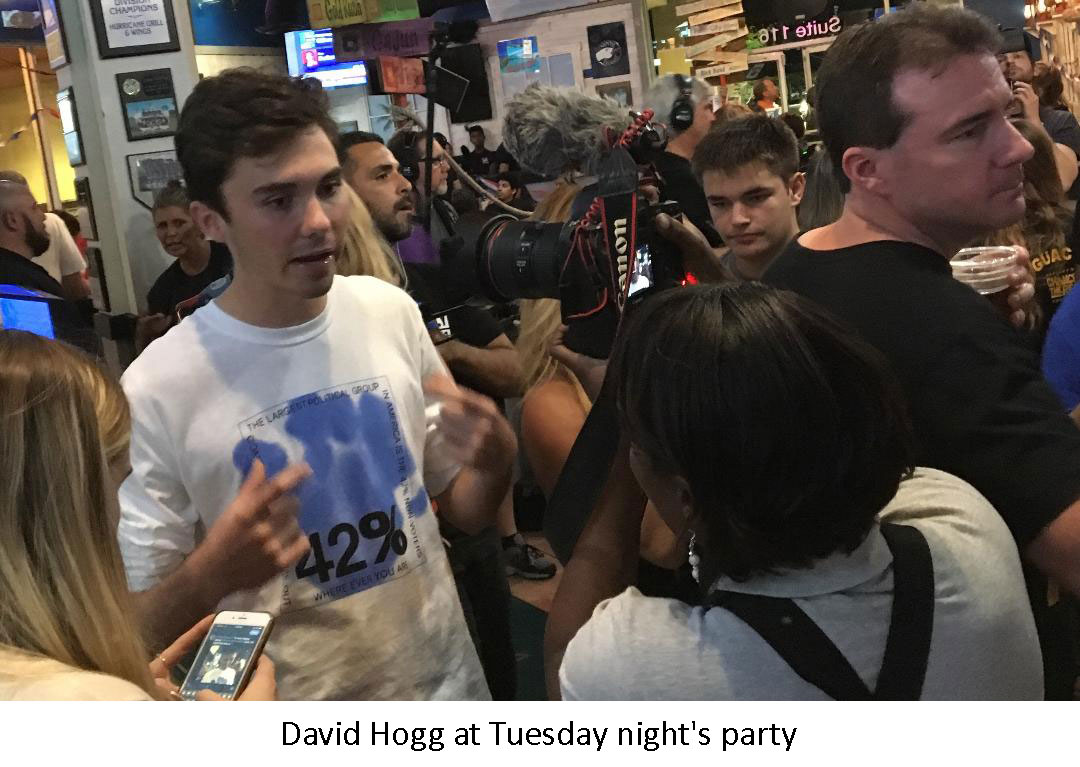 But this is Florida. The dichotomy of centralized blue urban areas against a wide swath of red counties always makes us a challenge for pollsters and prognosticators. The one hour lag of panhandle precincts gave the expected red rush, and sure enough DeSantis began pulling ahead. Scott as well asserted himself, in the meager means that term applies to Florida election results. That elation, which this community could use so ardently, was essentially muted.

The Democrats winning control of the U.S. House was but a moral victory. The projected Blue Wave did not materialize, and the forecast result of gridlock in D.C. would not deliver the political catharsis hoped for. Things quieted down, the throng gradually eroded, and acceptance came over the collected citizens. The night was not victorious, but in the end it was manageable. Things closed out with a variety of the remaining members addressing the crowd — a few parents, but mostly students who endured that February nightmare. Tears, laughter, applause, and hugs were to in abundance.

In the end the night was not disastrous for those gathered. The election results were unfavorable for most here, but collectively they would be fine. Maybe the candidates they backed did not win, but tonight was not a loss. Nothing like the losses felt nine months ago.

Brad Slager, a Fort Lauderdale freelance writer, wrote this story exclusively for Sunshine State News. He writes on politics and the entertainment industry and his stories appear in such publications as RedState and The Federalist