BOSTON (AP) — The fiancee of former NFL player Aaron Hernandez is speaking out publicly for the first time.

A two-part interview with Shayanna Jenkins-Hernandez is scheduled to air on the “Dr. Phil ” show on Monday and Tuesday.

In excerpts already released, Jenkins-Hernandez tells host Dr. Phillip McGraw that she does not think that Hernandez’s death in his prison cell on April 19 was a suicide, as authorities have ruled.

She says he was upbeat in their last telephone conversation just hours before he was found hanged, and told her and their daughter that “Daddy’s going to come home.”

Hernandez’s suicide came just days after he was acquitted in a 2012 double slaying. He was still serving a life sentence for the 2013 killing of Odin Lloyd.

VIDEO FROM THE DR. PHIL SHOW. 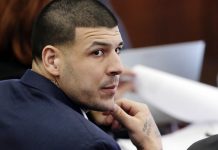 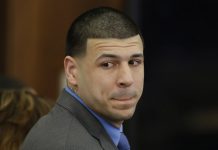 Former Gator Aaron Hernandez was elated about acquittal, not suicidal