Sometimes you don’t see the remembrance coming in the Parkland communiyu.

As the months have gone forward since the Parkland shooting, the memoriams inevitably begin to ebb as lives return to a normal routine. Our quotidian schedules nudge us along, and the tragedy moves gradually to that space occupied for special memories.

These days you don’t see as many Eagles bumper stickers on the road. Fewer businesses have #MSDStrong signs in their windows. At least one local eatery that had the staff wearing Stoneman Douglas T-shirts as their uniform for months has moved back to standard attire. Eventually, we all progress in our personal fashion, but the memory occasionally rears up and the bonding, though frequently unspoken, is evident and palpable.

This was the case on Sunday on CBS, just ahead of the the start of the NFL season’s Week 2. Mine is a family like many in South Florida, varied in our origins and resulting in a fracturing of sports allegiances. This means we frequently embark to establishments featuring multiple games to appease our numerous passions at once. When we decamped this week, it turned out our crowd settled in at an establishment mere blocks away from Marjory Stoneman Douglas High School.

As various fans arrived and set up locations in front of their respective games, the bar noise welled expectedly, with a hive feeling filling the establishment, as those in garish insignias staked out spaces. That calm pregame buzz is familiar to anyone venturing to these sports dens, as allies join and supplies are ordered ahead of the coin flips. Then the bartender came around and began to raise the volume on various televisions well ahead of the kickoffs.

The reason: a video came on from the NFL Today, featuring the actions and activities of some of the MSDHS football team following the events this past February. It was a tasteful segment full of respect but not overly maudlin. It showed the local Miami Dolphins paying tribute to fallen coach Aaron Feis, and some of the MSDHS players announcing the players selected at the NFL Draft.

And something unexpected but unsurprising took place in that moment. That pre-game din completely fell away and a solemn silence filled the room. Everyone was rapt during the piece. Squabbling allegiances halted as we all were on the same side. For the six-minute segment those tribal colors ran, we all became adorned in burgundy, silver, and black. 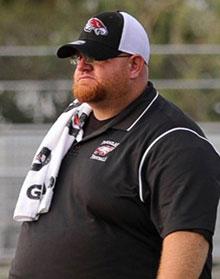 Entitled “17 Forever,” the video also featured former player Tyler Goodman. Now playing for Division 3 Nichols College, Goodman detailed that day on campus. A pair of his current coaches were on location, recruiting that fateful day. Goodman saw the shooter outside their office as he fled. He was also one of the last to speak to Assistant Coach Aaron Feis. Having organized the meeting with the Nichols coaches, he had been with Tyler before leaving. Feis ran to the shooting. As the whole world discovered, he lost his life while shielding others.

That gripping reality still flares up, and it still affects the community. While all were gathered for a day of relaxation and revelry, it was a stark moment as a very casual but deeply significant reminder came across everyone. Those athletic conflicts, whether petty or passionate, evaporated as we were again drawn together and became the same fans drawn in by a communal bond.

We all watched quietly, as a unit, each of us there aware of the very same dark reality that literally transpired within a short walk of where we gathered. It was that rare moment where everyone sat as a true community. Poignancy was added because Tyler Goodman was a former employee at that establishment.

A story played out on the national broadcast that was rooted in that very room.

This is how a region is affected in the aftermath. While most hear of these events briefly, before they become churned out by the ever-revolving news cycle, locally it continues to be a feature. In the neighborhoods and businesses there is a long-lasting result. We are all touched in differing ways, all affected in varying degrees. But it does become a bond, as we all understand the same significance. Before we all broke off into our camps in the bar, we were reminded we are still on the same team.

Last week was the high school’s first football game since the tragic event that cost 17 lives. And in that game, dedicated to those taken from our community, the Eagles came away victorious.

The margin of victory was 17.

Brad Slager, a Fort Lauderdale freelance writer, wrote this story exclusively for Sunshine State News. He writes on politics and the entertainment industry and his stories appear in such publications as RedState and The Federalist.