TBS and sister Turner network TNT plan to launch a total of six new series from stars such as Snoop Dogg, Daniel Radcliffe and Michael Moore. CNN has four new series in the works.

And TNT is working with filmmaker Ridley Scott to develop a night of original science-fiction programming.

These announcements were made Wednesday as the Turner networks unveiled to advertisers their plans for the season ahead.

Talk-show veteran O’Brien’s new four-year pact with TBS keeps him at the network where “Conan” debuted in November 2010 after his abrupt exit from “The Tonight Show” when NBC reinstated Jay Leno as host.

But the format and distribution strategy for O’Brien’s talents will evolve from his current Monday-through-Thursday hour. He will “expand the boundaries from a talk show to a range of personality-based, cross-platform experiences,” according to TBS and TNT President Kevin Reilly.

“In the past few years I’ve stumbled across many new and exciting ways of connecting with my audience,” O’Brien said, “and I’m eager to evolve my show into something leaner, more agile and more unpredictable.”

With Ridley Scott (“The Martian,” ″Alien: Covenant”), TNT will develop an evening-long programming block of original science fiction in many forms, serving as a showcase for hour-long series, short form and other formats.

Meanwhile, TNT has announced “Who Run the World?” — a documentary series executive-produced by Sarah Jessica Parker and Morgan Spurlock (“Super Size Me”). Slated to premiere later this year, it will focus on the issues that women face in today’s world.

And in late fall, TNT will debut “Michael Moore Live from the Apocalypse,” a nonfiction series from the Oscar-winning filmmaker that promises to blow the whistle on everything from Washington politics to Wall Street shenanigans. Moore will star in the series as well as direct and produce.

TBS has given the green light to these four new series:

— An update of the durable game show “The Joker’s Wild” hosted by Snoop Dogg.

— An untitled series from the comedy trio The Dress Up Gang, whose viral videos include the “My Roommate, My Friend” series.

— “Detroit 1963: Once in a Great City,” a four-part series about the city of Detroit at its high point.

— “American Heiress: The Patty Hearst Story,” a six-part series that will follow the transformation of Patricia Hearst from heiress to terrorist after her kidnapping.

— “1968: The Year That Changed America,” a four-part series that looks back at a year marked by seismic shifts in American politics, social movements and national leadership.

— “Kennedys: An American Dynasty,” a six-part series that explores how personal relationships within the Kennedy dynasty helped shaped national and global events.

— “Pope,” a six-part series that goes inside the Vatican to reveal the true power held by popes throughout the ages.

On tap for HLN is “Unmasking A Killer,” a five-part series that goes inside the investigation, case files and mind of The Golden State Killer, a man believed to be the most prolific uncaught rapist and serial killer in the nation.

Meanwhile, over at CBS, former One Direction singer Harry Styles has taken over James Corden’s “Late Late Show” for a night.

Styles was introduced as Corden on Tuesday night’s edition of the CBS talk show. He slipped into the role by telling a few jokes during an opening monologue , poking fun at two of late night comedy’s favorite targets, President Donald Trump and Hillary Clinton.

Corden returned the favor by appearing as Styles during a skit. He later resumed hosting duties.

Styles is spending the week with Corden on the “Late Late Show” in order to promote his new album. He performed his new single “Carolina” on Tuesday night. He’ll be taking part in Corden’s signature “Carpool Karaoke” segment Thursday. 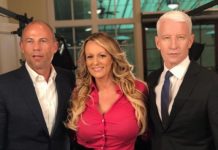