The Florida panhandle looks like a bomb dropped on the area

PANAMA CITY, Fla. (AP) — The devastation inflicted by Hurricane Michael came into focus Thursday with rows upon rows of homes found smashed to pieces, and rescue crews struggling to enter stricken areas in hopes of accounting for hundreds of people who may have stayed behind.

At least three deaths were blamed on Michael, the most powerful hurricane to hit the continental U.S. in over 50 years, and it wasn’t done yet: Though reduced to a tropical storm, it brought flash flooding to North Carolina and Virginia, soaking areas still recovering from Hurricane Florence.

Under a clear blue sky, families living along the Florida Panhandle emerged from shelters and hotels to a perilous landscape of shattered homes and shopping centers, wailing sirens and hovering helicopters.

“So many lives have been changed forever. So many families have lost everything,” he said.

The full extent of Michael’s fury was only slowly becoming clear, with some of the hardest-hit areas difficult to reach with roads blocked by debris or water. An 80-mile (130-kilometer) stretch of Interstate 10, the main east-west route, was closed.

Video from a drone revealed some of the worst damage in Mexico Beach, where the hurricane crashed ashore Wednesday as a Category 4 monster with 155 mph (250 kph) winds and a storm surge of 9 feet (2.7 meters).

Entire blocks of homes near the beach were obliterated, leaving concrete slabs in the sand. Rows and rows of other homes were rendered piles of splintered lumber. Entire roofs were torn away in the town of about 1,000 people, now a scene of utter devastation.

Florida state officials said 285 people in Mexico Beach had defied a mandatory evacuation order ahead of Michael. More than 375,000 people up and down the Gulf Coast were ordered or urged to clear out as Michael closed in. But emergency authorities lamented that many ignored the warnings.

National Guard troops made their way into the ground-zero town and found 20 survivors Wednesday night, and more rescue crews arrived Thursday. But the fate of many residents was unknown.

Mishelle McPherson and her ex-husband searched for the elderly mother of a friend. The woman lived in a small cinderblock house about 150 yards (meters) from the Gulf and thought she would be OK. The home was found smashed, with no sign of the woman. 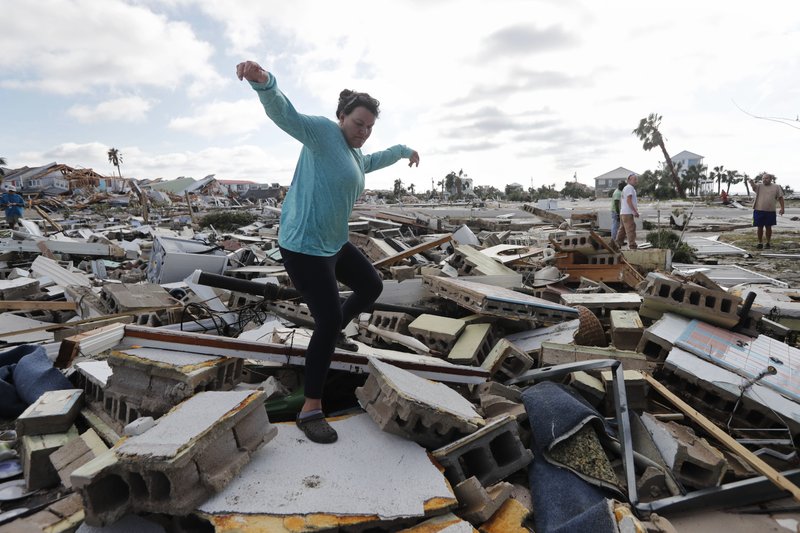 Mishelle McPherson climbs over rubble as she searches for her friend in Mexico Beach, Fla. (AP Photo/Gerald Herbert)

“Do you think her body would be here? Do you think it would have floated away?” McPherson asked.

Linda Marquardt, 67, rode out the storm with her husband at their home in Mexico Beach. When the house filled with storm surge water, they fled upstairs. “All of my furniture was floating,” she said. ”″A river just started coming down the road. It was awful, and now there’s just nothing left.”

As thousands of National Guard troops, law enforcement officers and medical teams spread out, the governor pleaded with people in the devastated areas to stay away because of hazards such as fallen trees and power lines.

“I know you just want to go home. You want to check on things and begin the recovery process,” Scott said. But “we have to make sure things are safe.”

More than 900,000 homes and businesses in Florida, Alabama, Georgia and the Carolinas were without power.

The Coast Guard said it rescued at least 27 people before and after the hurricane’s landfall, mostly from coastal homes. Nine people had to be rescued by helicopter from a bathroom of a home in hard-hit Panama City after their roof collapsed, Petty Officer 3rd Class Ronald Hodges said. 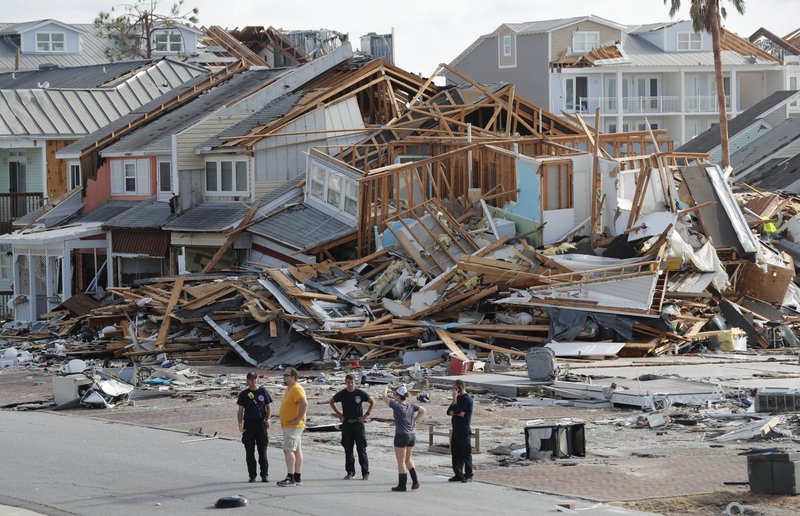 In Panama City, most homes were still standing, but no property was left undamaged. Downed power lines and twisted street signs lay all around. Roofs had been peeled off. Aluminum siding was shredded and homes were split by fallen trees. Hundreds of cars had broken windows. Pine trees were stripped and snapped off about 20 feet (7 meters) high.

In neighboring Panama City Beach, Bay County Sheriff Tommy Ford reported widespread looting of homes and businesses. He imposed a curfew and asked for 50 members of the National Guard for protection.

The hurricane also damaged hospitals and nursing homes in the Panama City area, and officials worked to evacuate hundreds of patients. The damage at Bay Medical Sacred Heart included blown-out windows and a cracked exterior wall though no patients were hurt.

The state mental hospital in Chattahoochee, which has a section for the criminally insane, was cut off by land, and food and supplies were being flown in, authorities said. All phone communicaiton was cut off to the complex of nearly 1,000 residents and more than 300 staff, leaving emergency radios as their only link out.

A man outside Tallahassee, Florida, was killed by a falling tree, and an 11-year-old girl in Georgia died when the winds picked up a carport and dropped it on her home. One of the carport’s legs punctured the roof and hit her in the head. A driver in North Carolina was killed when a tree fell on his car.

As the storm charged north, it spun off possible tornadoes and downed power lines and trees in Georgia. Forecasters said it could drop up to 7 inches (18 centimeters) of rain over the Carolinas and Virginia before pushing out to sea in coming hours. Street flooding was reported in Roanoke and other southwestern Virginia cities that reported motorists caught in flooding had to be rescued.

Forecasters said Michael was still a potent tropical storm Thursday evening, centered about 5 miles (8 kilometers) northwest of Roanoke Rapids, North Carolina, and packing top sustained winds of 50 mph (80 kph). It was racing to the northeast at 24 mph (39 kph) amid warnings it could spread damaging winds and more flash flooding in the region before moving offshore.

For the latest on Hurricane Michael, visit https://www.apnews.com/tag/Hurricanes