That wasn’t the only bad news for the engine manufacturer.

Along with watching the Chevrolet-powered three-time champion turn the fastest lap Friday in the final session of practice, Honda had another engine failure when James Hinchcliffe’s car slowed to a stop after Turn 3 and began spouting oil and water onto the apron of the racetrack.

It was the seventh Honda engine to fail during the lead-up to the 101st running of the Indy 500 on Sunday, and its proximity to race day has raised the anxiety level for all its teams.

“I’m sure everybody is concerned,” said pole sitter Scott Dixon. “It’s been an issue I think we’ve seen the last few days, or actually the last few weeks. Ever since the start of the year.”

Honda had five engines go at Long Beach. Eight more failed at Phoenix. Two went down at the Grand Prix of Indianapolis, the road race that begins the ramp-up for “The Greatest Spectacle in Racing.”

Honda engineers have found some commonalities in the engine failures in Indianapolis, but what is causing them remains somewhat of a mystery. Some failures have happened after hundreds of laps, while the engine Hinchcliffe was using on Carb Day had fewer than 30 laps on it.

Rob Edwards, one of the race strategists for Andretti Autosport, said he was “a little bit concerned” about the latest failure. But he was happy that the timing of Hinchcliffe’s problem will give Honda another chance to discover what went wrong before the green flag drops.

“Better it happens today,” Edwards said, “than the first few laps on Sunday.”

While reliability has been an issue for Honda, horsepower has not. Castroneves turned the fastest lap at 227.377 mph on Friday, but he was chased on the speed chart by six Honda-powered teams, including Dixon, defending race winner Alexander Rossi and two-time F1 champion Fernando Alonso.

“The car was the best so far the last two weeks,” said Alonso, who was fifth-quickest Friday and will start in the middle of Row 2. “They’re making some moves, trying different lines. I was practicing that and I also was in the simulator the last two or three days. The car felt great.”

Takuma Sato and Tony Kanaan were the fastest of the Honda cars during the hour-long session, which took place on a warm, sun-splashed afternoon. The weather could be far different on Sunday with scattered thunderstorms in the forecast for most of the day.

“After qualifying, we did a lot of race sim with various setups and downforce sims,” said Sato, who moved from A.J. Foyt’s team to Andretti Autosport this season. “We came in today and really shaked down the car. We broke everything down, new engines installed and felt it out. The car felt good.”

The practice session was also a positive step for Team Penske, which landed only Will Power in the first three rows. Castroneves set the pace, but Juan Pablo Montoya spent time atop the speed chart and all five of Roger Penske’s teams were in the top 15 by the time practice ended.

That was also good news for Chevrolet, which hoped to find more speed by race day.

“One year it happened that Chevy wasn’t on their game and they came back and did a great job,” Castroneves said, “so our goal was the same. Qualifying did not work out the way we wanted. We kept no working, digging, finding a way. We’re going to fight extremely hard out there.” 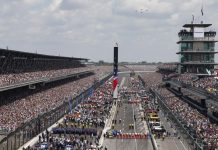 Welcome to our LIVE coverage of the 101st Indianapolis 500