Arriving on the Mexican side of a border bridge, they were met by a phalanx of police with riot shields. About 50 managed to push their way through before officers unleashed pepper spray and the rest retreated.

The gates were closed again, and a federal police officer used a loudspeaker to address the masses, saying, “We need you to stop the aggression.”

Waving Honduran flags and carrying umbrellas to protect against the sun, the migrants arrived earlier at the Guatemalan side of the muddy Suchiate River that divides the country from Mexico, noisily demanding they be let in.

“One way or another, we will pass,” they changed, clambering atop to U.S.-donated military jeeps parked at the scene as Guatemalan police looked on.

Young men began tugging on the fencing and finally succeeded in tearing it down, and men, women and children rushed through and toward the border bridge just up the road.

Edwin Santos of San Pedro Sula was one of the first to race past helpless Guatemalan police, clutching the hands of his father and wife.

“We are going to the United States!” he shouted euphorically. “Nobody is going to stop us!”

Earlier Friday, Mexico’s ambassador to Guatemala said his country intended to enforce what he called a policy of orderly entry in the face of the thousands trying to cross.

Ambassador Luis Manuel Lopez Moreno added that more than 100 migrants had been allowed to cross the bridge to apply for refugee status, including some who were from the caravan and others who were not.

Meanwhile, the rafts that normally ferry throngs of people across the river were carrying mostly merchandise and the raft operators said they had been warned by Mexican authorities not to carry people.

Jose Porfirio Orellana, a 47-year-old acorn and bean farmer from Yoro province in Honduras, said he hopes to reach the United States due to woeful economic conditions in his country.

“There is nothing there,” Orellana said.

The first members of the 3,000-strong caravan began arriving in the Guatemalan border town of Tecun Uman on buses and trucks early Thursday, but the bulk of the group sloshed into town on foot in a downpour late in the afternoon and into the evening.

As the sun rose, a military helicopter flew along the Mexican side of the river foreshadowing the difficulties they could face. At the same time, several busloads of Mexican federal police in riot gear deployed at the border crossing in Ciudad Hidalgo.

Mexican Foreign Relations Secretary Luis Videgaray said those with passports and valid visas would be let in immediately, though he acknowledged that “we anticipate those are the minority.”

Those who want to apply for refuge in Mexico will be welcome to do so “if they have a vulnerable situation in their country of origin,” Videgaray said in an interview with the Televisa network.

Any who decide to cross illegally and are caught will be detained and deported, the Mexican government has said.

Trump has made it clear to Mexico that he is monitoring its response. Early Thursday, he threatened to close the U.S. border if Mexico let the migrants advance. Later, he retweeted a video of Mexican federal police arriving at the Guatemalan border and wrote: “Thank you Mexico, we look forward to working with you!”

In April, Mexican immigration officials had some success in dispersing a smaller caravan by processing many who decided to seek refugee status in Mexico, but some did continue on to the U.S. border. 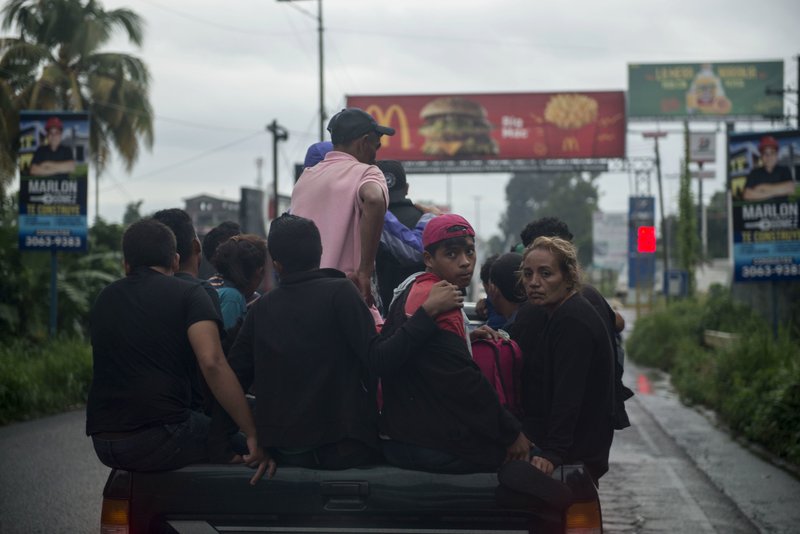 Honduran migrants ride on the bed of a pick-up truck towards the Mexican border, in Mazatenango, about 200 miles north-west from Guatemala City, Guatemala, Thursday, Oct. 18, 2018. (AP Photo/Oliver de Ros)’

Asked in the Televisa interview whether Mexico was doing Trump’s “dirty work,” Videgaray said Mexico “defines its migration policy in a sovereign manner” and the country’s priority is to protect the migrants and ensure their human rights.

He did not seem concerned about Trump’s threat to close the U.S.-Mexico border, saying the threat should be viewed in light of the hotly contested midterm elections in the United States, in which Trump has made border security a major campaign issue.

The foreign secretary noted that 1 million people transit the border legally every day, and about $1 million in commerce crosses every minute.

“Before taking decisions of that kind,” Videgaray said, “there would be many people in the United States … who would consider the consequences.”