Are Hillsborough Voters being taken for a ride?

The Hillsborough Metropolitan Planning Organization is dysfunctional and in need of a big housecleaning: a new executive director and new staff.

The MPO earlier this year sided with proponents of the proposed 1 percent sales tax increase as it began its 2045 long-range transportation planning (LRTP).

Now the MPO is trying to rewrite its own history in the 2045 planning effort, revamping a prior 20-year 2040 plan. The changes involve:

— Excluding the billion dollars of new road capacity that was funded in its 2040 Plan.

— Replacing the term “rail” to “rapid transit system”. Costly rail is like kryptonite to a large majority of Hillsborough voters.

— Using its 2045 survey to promote a specific agenda. Scenario planning is not intended to push projects but the MPO is doing exactly that with its 2045 planning process.

The 2040 planning scenarios were named “Suburban Dream”, “Bustling Metro” and “New Corporate Centers” and specific projects associated with each scenario were not thrust on the public. That all changed.

Beth Alden took over as director of the MPO when Chiarmonte departed in 2015. This reconfiguration mess is all on her watch.

Scenario A provides for only a “few” and “select” road projects. Really? It omits the billion-dollar-plus of new road capacity needs identified in the 2040 plan years ago in 2014. 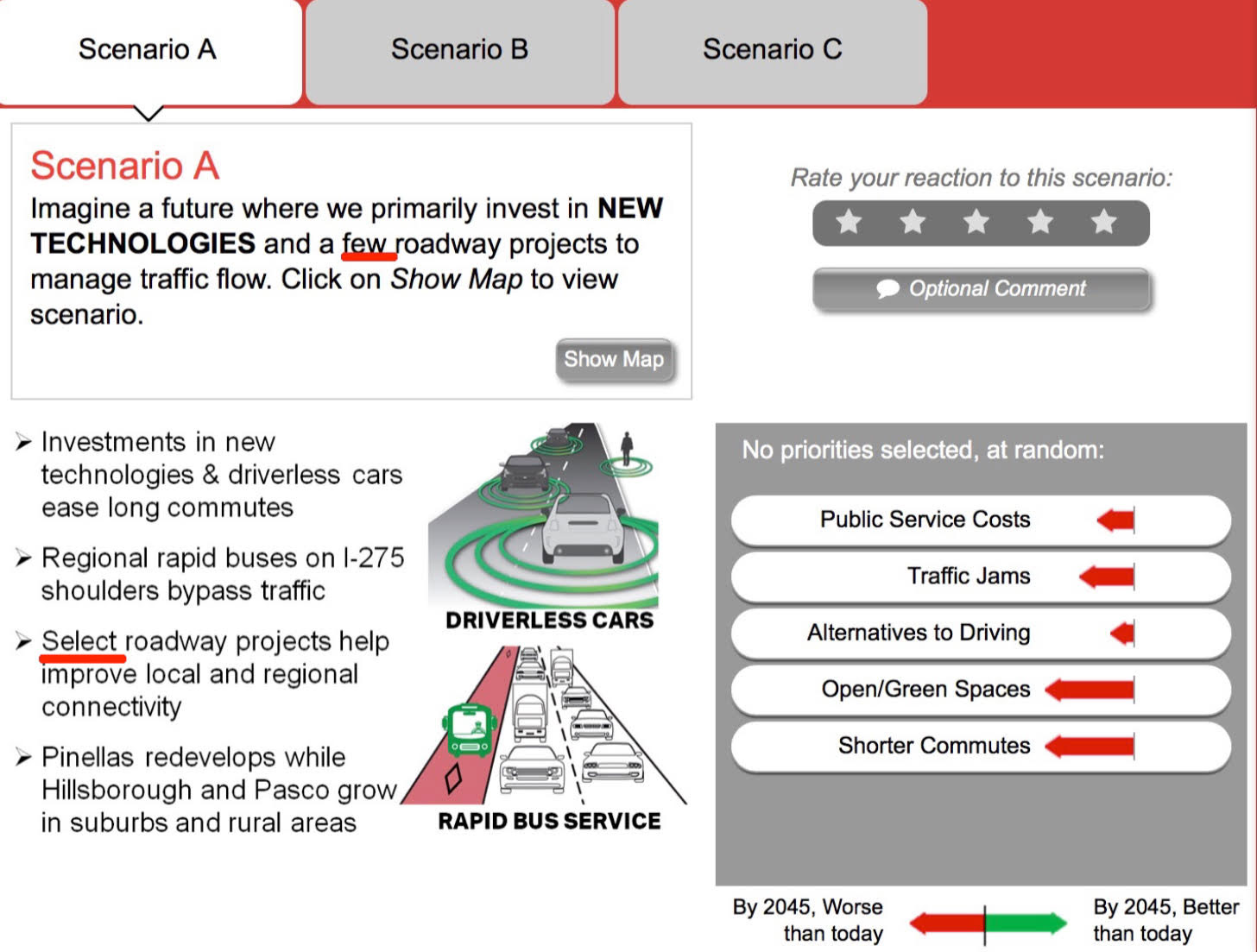 Scenario B only addresses interstates and some select few expressway interchanges, but includes the absurd specific project of tearing down I-275 from downtown to Bearss Avenue and converting that 10 miles of interstate to a street level boulevard with a train. I-275 is a major evacuation route that 200,000 people use everyday. Can the MPO legally propose tearing down a federal interstate? 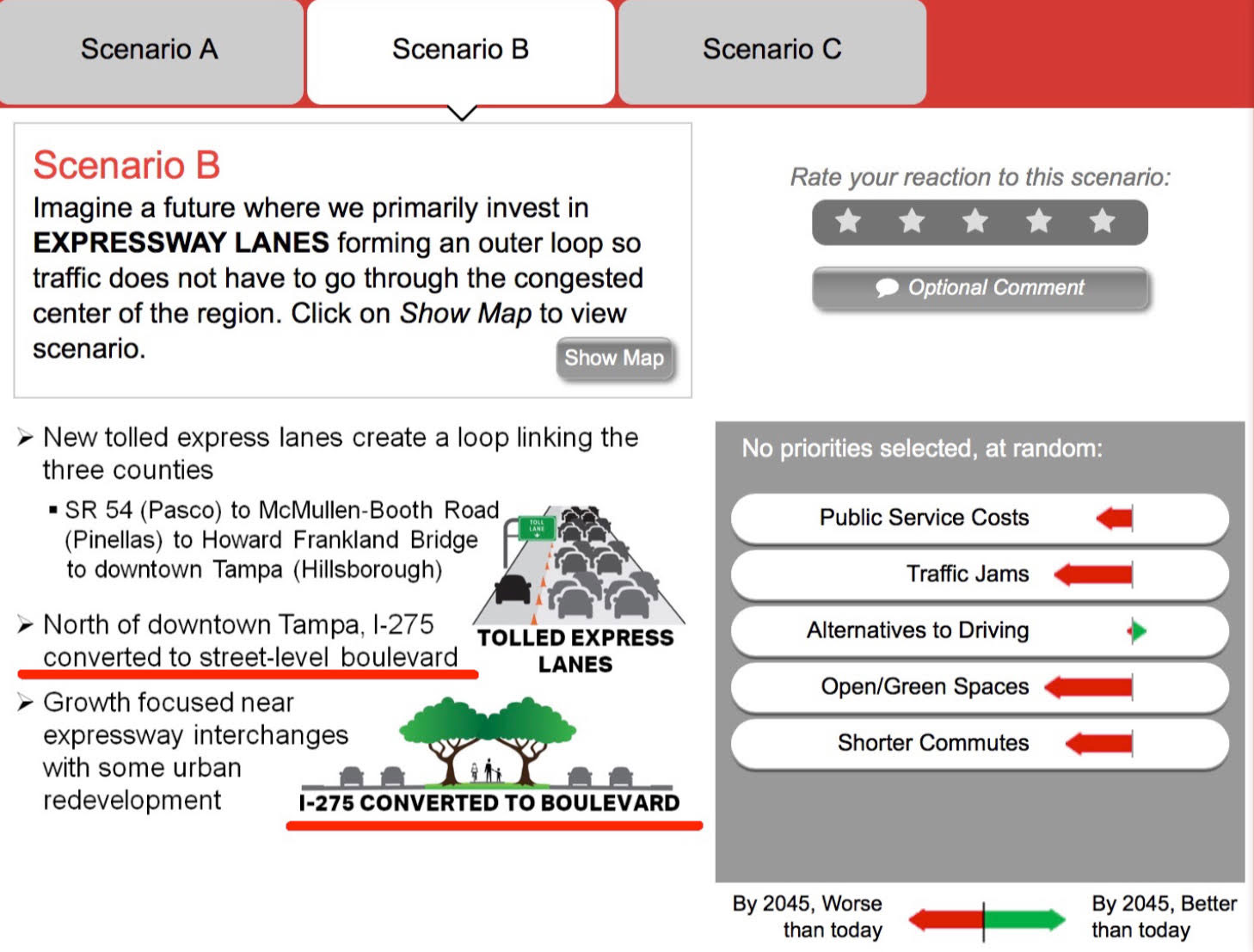 Scenario C is costly rail, rail and more rail. Why does it include Brightline, the privately funded rail service that has stated it wants private rail service to connect Orlando to Tampa? Because of the new proposed Ybor City baseball stadium with no allowance for parking?

The reformulated scenarios are all rigged to fool voters.

Bribes being offered to the public for participating in its biased 2045 survey reflects the MPO’s desperation.

Can the federally mandated taxpayer funded Hillsborough MPO use “freebies” to bribe people to take their taxpayer-funded surveys? Did the MPO Board authorize this? Is this legal?

Who is part of the MPO’s “freebie” bribery? Jeff Vinik, owner of the Lightning and the developer of the flailing Water Street Tampa project. It is Vinik and his downtown Tampa special interest allies who perpetrated the massive 30-year $16 billion transit tax referendum and funded 99 percent of the advocacy campaign.

The term “All for Transportation” is a sick and expensive joke.

This massive tax hike is a big boondoggle for the MPO central planners wasting gobs of taxpayer money on central planning that the MPO never stated they needed.

Who is complicit with whom?

With the MPO being massively overfunded by the transit tax hike, how was the MPO not included in the required performance audit?

There are no coincidences in this tax scam. MPO staff, at the highest level, have diminished its credibility.

They bank on the local media, which Vinik controls through bailouts and advertising, not scrutinizing or reporting all the information.  So far, it’s a winning bet.

So yes “It’s Time Tampa Bay,” not for approving the MPO’s 2045 rigged plan but for casting a big ray of sunshine on the Hillsborough MPO.

It’s also imperative for the MPO Board members to step up and rein in overreach by MPO staff.

Sharon Calvert is a conservative activist and with her husband, Mark, writes the blog Eye on Tampa Bay