Politics always turns dirtier a week ahead of voting day, but somebody involved in the Republican primary for commissioner of agriculture crossed the line this year — flooding phones with text blasts of candidate Baxter Troutman in an orange jumpsuit with a link to a 6-year-old Lakeland Ledger story, “Baxter Troutman Accused of Hitting His Wife with a Bedspread.”

Dial up the link: Seems in 2012, on the night of his 46th birthday, Troutman and his wife Becky got into an argument. In the heat of the moment, he threw a blanket at her, it struck her in the face — and she called the police. Troutman was arrested for domestic battery and spent a night in jail. The charge was dismissed.

The unsigned text attack, distributed to thousands of Florida voters a week before the primary, is the kind of campaign stunt that can backfire — and in the primary, it likely will.

It can make people feel uncomfortable. It can anger people who identify with the heartless theft of a private moment — in my case, make me cringe at the thought of the Troutmans’ 8-year-old daughter Holly-Kate, who adores her mommy and daddy, having to answer to school friends who are already rushing up to her with questions.

The story of the text is getting some attention, as the anonymous political operative who created it intended. Now I hear it’s about to become a story on TV8 in Tampa.

But so far, there’s something important missing from all the stories I’ve read.

Doesn’t anybody wonder what the “victim” of this bedspread assault, Becky Troutman, has to say six years later?

If Baxter Troutman is the unelectable, wife-beating scoundrel the text makes him out to be, how come his wife — a proud, independent woman, a former teacher with a graduate degree in school psychology — is still with him? How can she still be a partner in their marriage and serve as deputy treasurer for Troutman for Agriculture Commissioner and as chair of her husband’s affiliated political committee? 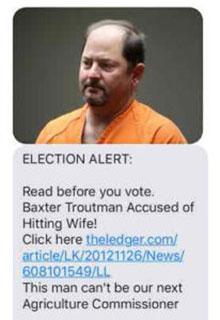 I asked her Thursday, and she seemed eager to tell her story.

“It’s embarrassing, what happened that night,” Becky explained. “If my husband hadn’t been serving in the state House as he was at the time, or if he wasn’t from such a prominent family, the story wouldn’t have made the news and I wouldn’t feel the need to talk about it  now.

“That night I made an impulsive decision to call the police — haven’t you ever done that?” she asked me. “I wish I hadn’t, I would take it back and do things differently if I could.”

Becky did admit that some good came of that emotion-frayed experience. “It didn’t destroy us, it made us stronger. It brought us closer,” she said. “We learned how to communicate and our marriage now is like night and day from what it was.

“Baxter Troutman is a good man. If he were anything less than an admirable man, it wouldn’t have worked out as it did and I wouldn’t be able to sit here and tell you, he’ll make a fantastic commissioner of agriculture.

“We had to look at our faith and our vows to get us through the public moment it became back then.

“Baxter was never charged, yet his political opponents have turned it into gutter politics.” 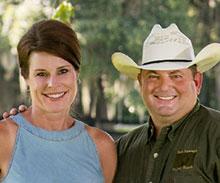 Becky said what bothers her most is “how insulting this has to be” in the public sphere, where real domestic violence is such a crushing problem. “Imagine yourself a real victim of spouse abuse and reading this petty story based on who we are rather than what actually happened.”

The Capitolist, an online news site, named Denise Grimsley, one of Troutman’s chief competitors in the GOP primary — along with her longtime ally, former Sen. Jack Latvala — as the suspect most likely behind the text blast. In fact, Brian Burgess, the story’s author, makes a strong case for Grimsley and Latvala as the culprits.

The state senator emphatically denied it during a telephone conversation Thursday.

“It’s absolutely not me,” Grimsley told me. “I talked to Baxter weeks ago and made a commitment to him that I would never bring the arrest incident up, and I’ve kept my promise.” Asked if she thought Latvala could be involved, she paused for a moment. “I don’t think so,” she said. Then she made it more definite: “No.”

I hope The Capitolist’s Burgess is wrong. It would be ironic if the only woman in the GOP ag race  is behind an attack without substance, teamed up with former Sen. #MeToo.

I asked candidate Matt Caldwell the same question — was he or his camp behind the text? “No way,” he answered. “We’ve made our contest comparing their legislative records to ours. We think we make a very good case for ourselves based on our stand on taxes, the Second Amendment, water, Republican principles of all kinds and knowledge of the issues Florida faces. We don’t have to resort to something like that.”

Unfortunately, this is politics. We may never find out for sure where the text came from.

To refresh your memory on the Republican candidates in the ag commissioner race: Troutman, grandson of citrus and cattle magnate Ben Hill Griffin Jr., a farmer, rancher and business owner who served four terms in the Florida House of Representatives; Caldwell, a state representative from Fort Myers who is a real estate appraiser; Grimsley, a state senator and hospital administrator from Sebring; and Mike McCallister a retired Army colonel who owns a tree farm in Plant City.

Here’s the bottom line about the text: All we’ve got is an empty jail jumpsuit. If the “victim” says nothing happened, if state prosecutors said in 2012 it wasn’t worth pursuing, why is it OK to keep the false attack alive? Answer: it isn’t. No wonder whoever pressed the button to launch the text did so under cover of secrecy.