With the Trump administration continuing renegotiations of the North American Free Trade Agreement (NAFTA), members of the Florida congressional delegation continue to insist they include more protection for the state’s agriculture community.

This week U.S. Rep. Vern Buchanan, R-Fla., rounded up more than a dozen members of the Florida delegation in sending a letter to U.S. Trade Representative Robert Lighthizer urging him to protect farmers in the Sunshine State.

U.S. Rep. Carlos Curbelo, R-Fla., the only member of the Florida delegation on the U.S. House Ways and Means Committee which oversees trade, was also one of the organizers of the letter. Curbelo’s office stressed the important role Florida plays in the nation’s agriculture and noted how much NAFTA has hurt farmers in the Sunshine State.

“According to the Florida Department of Agriculture, Florida is currently the second largest producer of fruits and vegetables in the country, and produces some of the highest quality produce in the world. Since 2000, Florida has lost between $1 billion and $3 billion a year due to increased Mexican imports,” Curbelo’s office noted.

“With reports that the Administration is seeking to conclude negotiations with Mexico as part of an updated North American Free Trade Agreement (NAFTA) by the end of this month, we are urging you to continue to advocate for inclusion of provisions to protect Florida’s specialty crop industry. NAFTA has been a great success for many industries in Florida, but it is important to address the challenges it has presented for the specialty crop industry,” the members of the Florida delegation wrote. “As you know, an unprecedented growth in imports from Mexico as a result of its unfair subsidies and illegal seasonal dumping is having a devastating impact on farmers in our home state and throughout the Southeast. Because we share a similar growing season and produce many of the same specialty crops as Mexico, Florida producers have been particularly hard hit. According to the Florida Department of Agriculture and Consumer Affairs, Florida has experienced a loss of between $1 billion and $3 billion dollars a year since 2000. As the Administration has widely recognized, the seasonal and perishable sectors in the Southeast have suffered disproportionally under the original NAFTA.

“It is absolutely critical that any final agreement must allow our fruit and vegetable growers to address the challenges they face from unfairly traded imports,” the representatives continued. “We support the U.S. proposal to use seasonal data to seek regional relief in anti-dumping and countervailing duty cases because we need to provide this sector with the necessary tools to make the case that that Mexico is selling produce at unfairly low prices when certain crops are in season in a particular region.”

The members of the Florida delegation pointed to unfair trade practices that Mexico has embraced.

“With an existing $5 billion agricultural trade deficit with Mexico, nearly all of which is in the fruit and vegetable sector, we cannot afford to wait any longer to address these unfair trade practices and mounting Mexican imports,” they wrote. “Florida is one of the leading producers of fruits and vegetables in the country, and the sector is absolutely critical to our state economy because it supports nearly 100,000 jobs and has an economic impact of more than $12 billion a year. While we grow the highest quality produce in the world and can compete in the global marketplace, our industry is hurting and in need of access to adequate trade remedies that are accorded to every other sector in the U.S. As President Trump stressed in his July 31 speech in Florida, with farmers suffering from unfair trading practices, now is the time to strengthen NAFTA. Again, thank you for your efforts to modernize NAFTA while protecting our specialty crop industry. We urge your steadfast commitment to ensuring these vital trade remedies are included in any final NAFTA agreement. Thank you for your prompt attention to this critically important matter and we look forward to your response.” 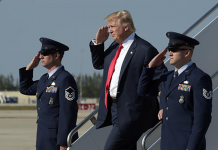 President Trump will keep the U.S. in NAFTA for now