WASHINGTON (AP) — In his prime-time speech to the nation, President Donald Trump declared a border crisis that’s in sharp dispute, wrongly accused Democrats of refusing to pay for border security and ignored the reality of how drugs come into the country as he pitched his wall as a solution to varied ills.

A look at his Oval Office remarks Tuesday night:

TRUMP: “Our southern border is a pipeline for vast quantities of illegal drugs, including meth, heroin, cocaine and fentanyl. Every week, 300 of our citizens are killed by heroin alone, 90 percent of which floods across from our southern border.”

THE FACTS: A wall can’t do much about that when drug trafficking is concentrated at land ports of entry, not remote stretches of the border.

The Drug Enforcement Administration says “only a small percentage” of heroin seized by U.S. authorities comes across on territory between ports of entry. The same is true of drugs generally.

In a 2018 report, the agency said the most common trafficking technique by transnational criminal organizations is to hide drugs in passenger vehicles or tractor-trailers as they drive into the U.S. though entry ports, where they are stopped and subject to inspection. They also employ buses, cargo trains and tunnels, the report says, citing other smuggling methods that also would not be choked off by a border wall.

Trump recently denied that traffickers use entry ports at the southern border, contradicting the evidence and assertions of his drug enforcement personnel.

Trump stretched credulity even more by comparing the wall money he wants from Congress to the cost of the entire drug problem in the U.S.: “The border wall would very quickly pay for itself. The cost of illegal drugs exceeds $500 billion a year, vastly more than the $5.7 billion we have requested from Congress.”

THE FACTS: That’s not true. They just won’t fund it the way he wants. They have refused his demand for $5.7 billion to build part of a steel wall across the U.S.-Mexico border

Democrats passed legislation the day they took control of the House that offered $1.3 billion for border security, including physical barriers and technology along the U.S. southern border.

Democrats have also supported broader fence-building as part of deals that also had a path to legal status for millions of immigrants living in the country illegally.

In 2013, Senate Democrats voted for a failed immigration bill that provided roughly $46 billion for a number of border security measures — including new fencing — but that legislation would have created a pathway to citizenship for some of the estimated 11 million immigrants living in the U.S. illegally.

The 2013 Border Security, Economic Opportunity and Immigration Modernization Act had money to double the number of miles of fencing, to 700 miles (1,126 km), as well as for more border patrol agents. It also had a mandatory employment verification system to ensure all U.S. employees are authorized to work in the country. In exchange, however, the bill allowed immigrants living in the country illegally to apply for a provisional legal status if they paid a $500 fine and had no felony convictions.

As well many Democrats voted for the Secure Fence Act of 2006, which has resulted in the construction of about 650 miles (1,050 kilometers) of border barrier. But that legislation didn’t authorize the kind of wall Trump has long been advocating since he launched his campaign.

HOUSE SPEAKER NANCY PELOSI: “The fact is: President Trump has chosen to hold hostage critical services for the health, safety and well-being of the American people and withhold the paychecks of 800,000 innocent workers across the nation – many of them veterans.” — response to Trump’s remarks.

SEN. CHUCK SCHUMER, Senate Democratic leader: “The president of the United States – having failed to get Mexico to pay for his ineffective, unnecessary border wall, and unable to convince the Congress or the American people to foot the bill – has shut down the government.” — response to Trump.

THE FACTS: That’s one way to look at it. But it takes two sides to shut down the government. Trump’s demand for $5.7 billion for his border wall is one reason for the budget impasse. The refusal of Democrats to approve the money is another.

TRUMP: “Over the years thousands of Americans have been brutally killed by those who illegally entered our country and thousands more lives will be lost if we don’t act right now.”

THE FACTS: His statement that people in the country illegally are a special menace to public safety is at odds with plentiful research.

Multiple studies from social scientists and the libertarian think tank Cato Institute have found that people here illegally are less likely to commit crime than U.S. citizens, and legal immigrants are even less likely to do so.

A March study by the journal Criminology found “undocumented immigration does not increase violence.”

The study, which looked at the years 1990 through 2014, said states with bigger shares of such people have lower crime rates.

As well, a study in 2017 by Robert Adelman, a sociology professor at University of Buffalo, analyzed 40 years of crime data in 200 metropolitan areas and found that immigrants helped lower crime. New York City, for example, has the nation’s largest population of immigrants living in the country illegally — about 500,000 — and last year had only 289 murders among a total population of 8.5 million people, according to preliminary data. Those numbers mean a person’s odds of becoming a victim of homicide in tightly packed, diverse New York City were about the same as they were last year in Montana.

And Ruben Rumbaut, a University of California, Irvine sociology professor, co-authored a recent study that noted crime rates fell sharply from 1990 to 2015 at a time when illegal immigration spiked.

TRUMP: “Tonight I am speaking to you because there is a growing humanitarian and security crisis at our southern border.”

THE FACTS: Few would argue that a humanitarian crisis is unfolding, as the demand for entry by migrants and the Trump administration’s hardline response to them are overwhelming border resources, further backlogging the asylum system and forcing migrants to live in abysmal conditions on the Mexican side of the border. Two sick children recently died in the administration’s custody after making the journey to the U.S. 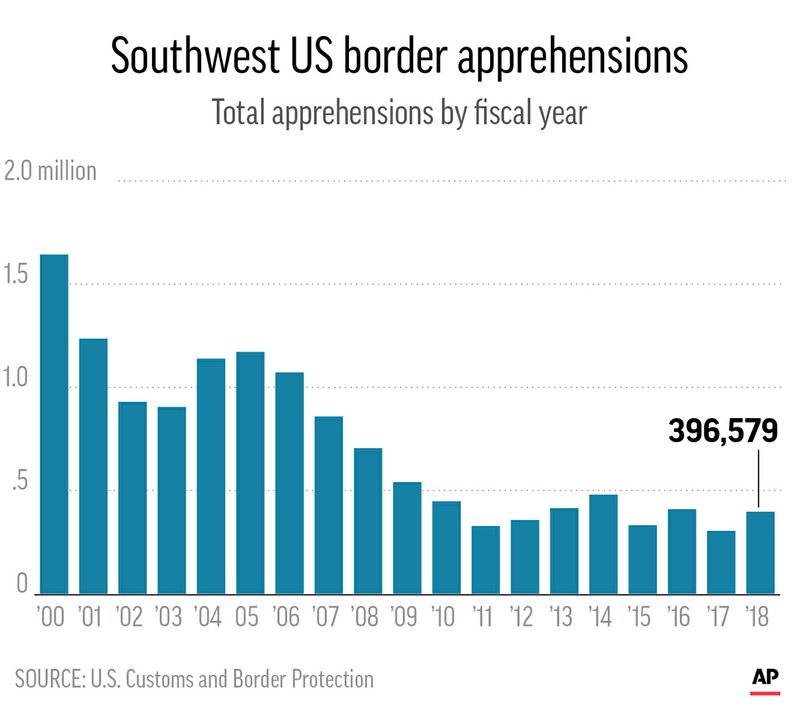 The debate is much sharper over whether a national security crisis exists at the border. Whether he is right or wrong, Trump has exaggerated the problem by repeatedly promoting the discredited notion that terrorism suspects are pouring into the U.S. from Mexico by the thousands.

While the number of families coming over the border has risen sharply, the number of border arrests — the leading gauge of how many people are trying to cross illegally — is actually one-quarter of what it was in 2000, dropping from 1.6 million then to 400,000 in 2018. Also noteworthy: The contingent of active-duty U.S. troops at the border has been more than halved, dropping from a peak in the fall of about 5,900 to about 2,350 last week.

TRUMP: “The wall will also be paid for indirectly by the great new trade deal we have made with Mexico.”

THE FACTS: Mexico is not paying for the wall despite what Trump promised during the 2016 campaign, and nothing in the trade agreement would cover or refund the construction cost.

Trump is assuming a wide variety of economic benefits will come from the agreement, but they can’t be quantified or counted on. For example, he has said the deal will dissuade some U.S. companies from moving operations to Mexico and he credits that possibility as a payment by Mexico for his wall.

The deal updates the North American Free Trade Agreement, in the main preserving NAFTA’s liberalized environment of low or no tariffs among the U.S., Mexico and Canada, while making certain improvements for each country. Trump stated inaccurately that it’s “brand new. It’s totally different.”

Moreover, it’s not in effect. The deal has yet to be ratified in any member country and its chances of winning legislative approval are not assured.

TRUMP: “This barrier is absolutely critical to border security.”

THE FACTS: The evidence is inconclusive as to whether walls are “absolutely critical” or actually work in deterring illegal crossings.

Congress’ main watchdog reported in 2017 that the government does not have a way to measure how well barriers work to deter immigrants crossing illegally from Mexico. Despite $2.3 billion spent by the government on such construction from 2007 to 2015, the Government Accountability Office found that authorities “cannot measure the contribution of fencing to border security operations along the southwest border because it has not developed metrics for this assessment.” 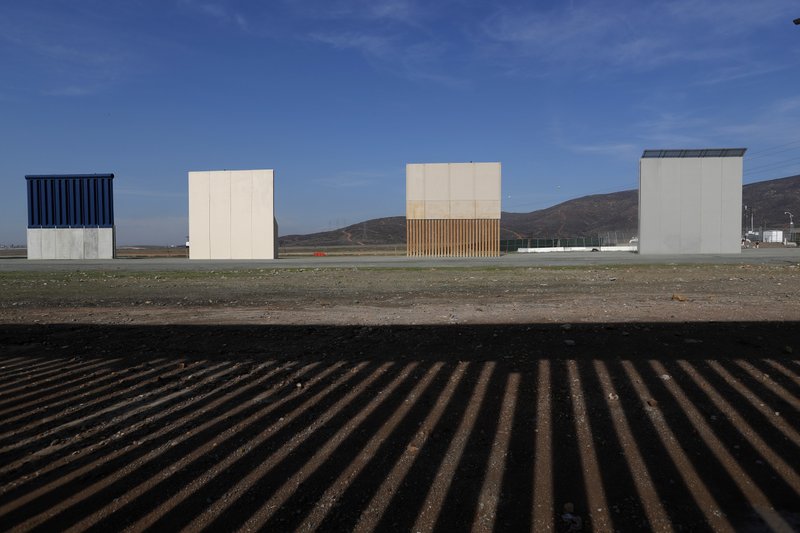 Border wall prototypes stand in San Diego near the Mexico-U.S. border, seen from Tijuana, Mexico, where the current wall casts a shadow in the foreground, on Dec. 12, 2018. (AP Photo/Moises Castillo, File)

Few people dispute that fences contributed to a sharp drop in crossings in cities like San Diego and El Paso, Texas, where people can easily blend in once they enter the country. Before fences were built in San Diego, crossers played soccer on U.S. soil as vendors hawked tamales, waiting until night fell to overwhelm agents. However, those barriers also pushed people into more remote and less-patrolled areas like in Arizona, where thousands of migrants have perished in extreme heat.

When barriers were built in the Border Patrol’s Yuma, Arizona, sector in the mid-2000s, arrests for illegal crossings plummeted 94 percent in three years to 8,363 from 138,438. When barriers were built in San Diego in the 1990s and early 2000s, arrests fell 80 percent over seven years from 524,231 in 1995 to 100,681 in 2002. But both areas also saw sharp increases in Border Patrol staffing during that time, making it difficult to pinpoint why illegal crossings fell so dramatically.

TRUMP: “America proudly welcomes millions of lawful immigrants who enrich our society and contribute to our nation but all Americans are hurt by uncontrolled illegal migration. It strains public resources and drives down jobs and wages.”

THE FACTS: The U.S. is not experiencing “uncontrolled” illegal immigration. The debate is over whether the controls are strong enough.

As for the costs, a major academic study in 2016 by the National Academy of Sciences, Engineering and Medicine found the job impacts of immigration, when measured over at least 10 years, are very small. It found immigration — legal and illegal — is an overall benefit to long-term economic growth.

Some evidence suggests that skilled immigrants boost wages. Native-born Americans without a high-school degree are most likely to suffer.

For AP’s complete coverage of the U.S. government shutdown: https://apnews.com/GovernmentShutdown