DeSantis keeps having racists pop up along his campaign trail

Ron DeSantis says after vetting Ralph Arza, he has dropped him from a fundraiser taking place with Jeb Bush.

After the flyer was printed, with Arza as a co-chair, it all of a sudden dawned on DeSantis that there would be another race scandal swarming around him. 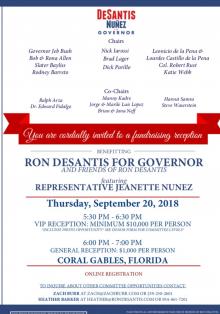 The fact that Arza made it on the flyer in the first place shows the company DeSantis keeps.

Ralph Arza, the former Florida representative who found himself in hot water for using — you guessed it — racially charged language, was going to co-chair a fundraiser for Ron DeSantis.

The Miami Herald reported the fundraiser but later updated the piece to say Arza had been removed.

I’m sure the removal came with a wink and a nod.

DeSantis just can’t seem to stay away from racist people. Is DeSantis a racist, or just lacking in judgment?

I say it’s both. DeSantis would have to have been living under a rock to a) not know Arza’s history surrounding his departure from the Florida Legislature and b) not know that Donald Trump used that information against Marco Rubio on the 2016 campaign trail.

Donald Trump, who single handedly made DeSantis the GOP nominee for governor, thought Arza was too racist. 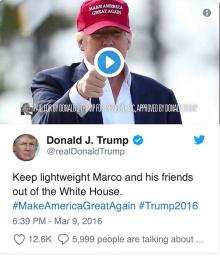 Let that sink in.

I’m not surprised, nor should anyone else. Like I said before, expect David Duke to pop up on the trail with DeSantis!

When Donald Trump is calling a Republican out for racist behavior, that person should never make it on a DeSantis fundraiser flyer, prior to being “vetted”.

Not that anyone with common sense believes an entire flyer was made prior to vetting!

For those of you who don’t recall, let me refresh your memory:

On the 2016 presidential campaign trail, Trump tweeted the ad with these words: “Keep lightweight Marco and his friends out of the White House.”

Looks like Florida needs to keep Ron DeRacist and his friends out of the Governor’s Mansion.