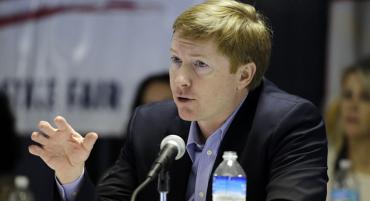 Ducks Unlimited (DU) announced on Wednesday that former Florida Agriculture Commissioner Adam Putnam will be their new CEO. Putnam, who ran for governor last year but was defeated by Ron DeSantis in the Republican primary, will start his new duties on April 1.

Founded in 1937, Ducks Unlimited is a nonprofit based in Memphis focused on protecting wetlands and waterfowl. There are hundreds of thousands of members across the nation.

“I joined Ducks Unlimited when I was 16 and have a lifelong appreciation of the conservation work the organization accomplishes,” Putnam said. “It’s humbling to be chosen as DU’s CEO, and as a lifelong hunter, angler and conservationist, I look forward to building on our record of success.”

Dale Hall, Duck Unlimited’s CEO, is staying on until the end of June.

“As the outgoing CEO, it’s definitely a bittersweet day,” Hall said. “But I am going to retire from my position at DU knowing the organization is in very capable hands thanks to the hard work and diligence of our volunteer search committee. They’ve truly picked a winner in Adam and I can’t wait to see what the future holds for both Adam and Ducks Unlimited.”

“From the outset, the CEO search committee here at Ducks Unlimited wanted to find a unique balance of conservation, policy and agriculture background in the new CEO candidate,” said DU President Rogers Hoyt. “In Adam, we feel we have hit on all three. Not to mention he’s an approachable, passionate and visionary person, so Adam was the perfect fit.”

Putnam sketched out his vision for DU on Wednesday.

“My vision for DU is to bring together conservation-minded folks from all walks of life, whether they’re farmers, city-dwellers, veterans, biologists, hunters…anyone who has a connection to landscapes, which is everyone,” Putnam said. “If we are going to fill the skies with waterfowl, we must build a coalition of people who believe waterfowl-filled skies matter. We need to work together to reach a common goal of healthy wetlands and abundant water for wildlife, people and their communities across North America.”

Kevin Donohoe, a spokesman for the Florida Democratic Party, weighed in on Putnam’s new job
“Over the course of his twenty-year career in politics, Adam Putnam endangered Floridians’ safety, helped destroy our environment and turned the Department of Agriculture into a national embarrassment. Putnam is the ultimate career politician and his name will forever be associated with scandal, incompetence and corruption in Florida,” Donohoe said. “Putnam always promised to put Florida First, and he’s finally done that by leaving the state and giving up on public life. Good riddance.”

Putnam was elected to Congress in 2000, rising quickly to become part of the GOP leadership. In 2010, he ran for state agriculture commissioner and won. Four years later, Putnam was easily elected to a second term.