Stormy Daniels has already finished her interview with Anderson Cooper of 60 Minutes, airing tonight at 7 p.m. on CBS, along with being streamed on CBSN and CBS All Access. There is no question that this will be a rating bonanza for CBS but the real question is will what she says really matter?

Daniels will fill in some very graphic details about the alleged affair. She is said to have evidence that Daniels hopes will prove her case against President Trump. But it is unlikely to cause any real Trump supporter to turn on him.

But the real problem President Trump is not about a possible affair it is about how the matter was handled. Daniels says that she is no longer bound by a nondisclosure agreement tied to a $130,000 payout. But here is where things begin to get to be a problem President Trump’s personal lawyer Michael Cohen said he paid Daniels with his own money without Trump’s knowledge.

That payment could be a violation of campaign finance law — one reason the Daniels saga is more serious than it first appeared. There is also President Trump’s problem with women voters and the Daniels is unlikely to help that issue.

Meanwhile, the Daniels camp is claiming the reason they are free to do the 60 Minutes, interview is because the NDA is invalid because President Trump didn’t sign it himself.

For those living under a rock Daniels is the adult film star who says she had an affair with Donald Trump in 2006 a full ten years before he became the president. Now she is suing him, and taking her case to a national audience on one the respected news programs on television. Daniels, whose real name is Stephanie Clifford, will be giving her first full-length interview on national television since the story of her alleged affair with President Trump surfaced at the beginning of the year.

There has been an ongoing battle in the Daniels and Trump camps to stop this interview. Trump’s lawyer obtained a restraining order from an arbitrator that was meant to stop the interview from becoming public.

The story of the Trump-Daniels affairs first came to light on January 12 in a Wall Street Journal investigation. Since then, the details have become troubling.

Whatever comes out from tonight’s interview the real key will come out of the possible Campaign Finance Law. A violation of that law would be something that could be used in the Mueller probe.

So, tonight is more of a beginning than it is the end of this issue. But the one thing we can say is there will be plenty of people watching CBS tonight at 7 p.m. 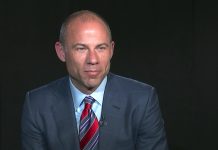