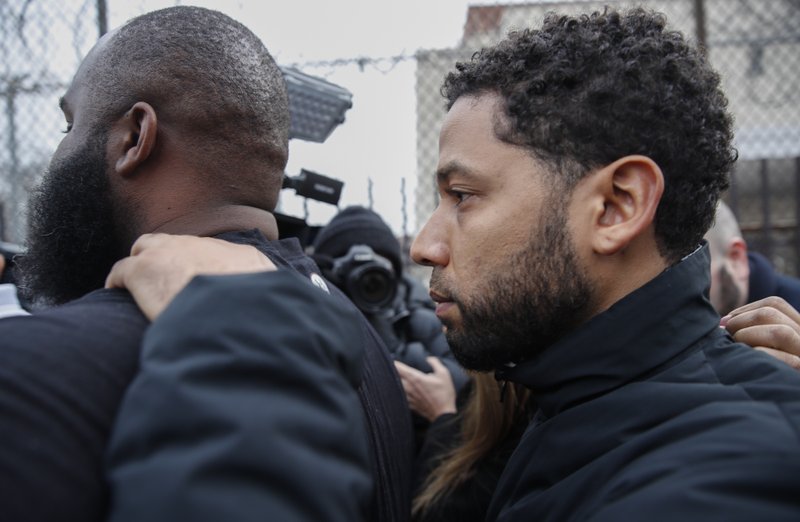 CHICAGO (AP) — The story Jussie Smollett told police had it all: racism, homophobia, politics, celebrity — all tied up with a hangman’s noose. There was no question the news coverage was going to be massive.

In many ways, that coverage is an object lesson in the foibles of modern reporting. The story showed where news outlets teeter on the line between driving social media and being driven by it, between healthy skepticism and cautious credulity.

“We have the combination of social media and a polarized country converging here,” said Charles Whitaker, interim dean of Northwestern University’s Medill School of Journalism, Media, Integrated Marketing Communications. Everyone is seeing events “from their political lens. No one is really good at distancing themselves.”

The story began as an account of a hate crime that went viral instantly.

A star of the hit Fox television show “Empire,” Smollett reported that he had been attacked around 2 a.m. on Jan. 29 on his way home from a sandwich shop. Smollett — who, like his character, is black and gay — said two masked men shouted racial and anti-gay slurs, poured bleach on him, beat him and placed a rope around his neck.

National media soon got wind of the story. Social media poured rocket fuel on it and set it ablaze.

Within hours, now Democratic presidential candidates Kamala Harris and Cory Booker — both African-American — compared the attack to an “attempted modern-day lynching.” Even President Donald Trump seemed to take the story at face value.

But as police searched for surveillance footage of the attack, people began to wonder. Two men seen in a video went from being persons of interest to suspects, then to witnesses against Smollett.

It all came crashing down Thursday, when the 36-year-old actor turned himself in and was charged with felony disorderly conduct, an offense that alleges he made a false police report. Police claim Smollett staged the attack, enlisting two brothers who were his friends because he was unhappy with his salary.

After Smollett was charged, it seemed people who had been holding back suddenly felt free to admit they had doubts all along.

CNN anchor Don Lemon — who met Smollett during a guest appearance on “Empire” — said his initial reaction to the attack was not disbelief but “sadness.”

“I wasn’t shocked,” Lemon, a black man who came out as gay in 2011, told “Entertainment Tonight.” ″I didn’t like that it happened to him.”

As police waited for Smollett to surrender, Lemon acknowledged Wednesday on CNN that many in the gay and African-American communities “had questions about this from the very beginning, the veracity of this story.”

It was minus 4 degrees that night.

“And let’s be honest,” Lemon said, “there are probably not a whole lot of MAGA fans watching ‘Empire.’”

But Smollett stuck to his story. And until a couple of weeks in, the media had nothing but a “gut” feeling to go on, said Tom Jones, senior media writer for the Florida-based Poynter Institute.

“I think most of the media handled it responsibly, saying, ‘Hey look. Here’s what the allegations are. Here’s what he’s saying. Here’s what he claimed happened. And then we’ll see where the investigation goes from here,’” Jones said.

“The word ‘alleged’ was all over any reference from the moment it was first reported,” Northwestern’s Whitaker added. “I didn’t hear a lot of really super-sympathetic coverage.”

Conservative columnist Ben Shapiro disagrees. He told Fox News that the volume of coverage on Smollett was “enormous” because “there’s a narrative to be promoted.”

“When a story is too perfect to be true, it usually is, and this is one of those cases,” he said.

Joe Saltzman said the Smollett story was a case of sheer “overkill,” even in this era of the 24-hour news cycle.

“This is not good journalism,” Saltzman, a professor at the University of Southern California’s Annenberg School for Communication and Journalism, wrote in an email. “This is gossip and chatter.”

Robin Roberts, anchor of ABC’s “Good Morning America,” came in for some of the harshest criticism for a Feb. 14 exclusive interview with Smollett. Many accused her of failing to push him hard enough.

On Thursday’s show, Roberts called the situation a “setback for race relations,” adding that she “cannot think of another case where there is this anger on so many sides, and you can understand why there would be.”

Trump’s sympathy for Smollett also evaporated. “What about MAGA and the tens of millions of people you insulted with your racist and dangerous comments!?” he tweeted Thursday, tagging the actor.

Earlier this week, as Smollett’s story began to unravel, his siblings took to Instagram.

Smollett is free after posting $10,000 in bail, and his attorneys said he maintains his innocence. On Friday, he was cut from the final two episodes of this season of “Empire.”

“I just wish that the families of gun violence in this city got this much attention,” he said angrily.