The Grammy-nominated artist wore a fitted white dress showing off her bump.

It’s been long speculated that Cardi B, whose real name is Belcalis Almanzar, was expecting. Her fiance is rapper Offset, of the hip-hop group Migos.

Offset, whose real name is Kiari Kendrell Cephus, posted an Instagram photo of the two with a caption reading: “Thank you for all of your support. We feel so blessed.” The couple has been engaged since October.

Cardi B’s debut album was released Friday. “Invasion of Privacy” is set for a No. 1 Billboard debut.

The record comes 10 months after her smash hit “Bodak Yellow.” She performed that, “Bartier Cardi” and “Be Careful” on Saturday night. 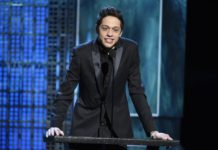