Shock jock and Nielsen looking at a fierce legal battle

Disclaimer: Bubba The Love Sponge currently airs on AM 820 Tampa Bay as well as 98.3 FM Pinellas County. Both are owned by News Talk Florida’s parent company, Genesis Communications.  The alleged events at issue in this trial occurred before this relationship began.

Next week, a court case is scheduled to begin between a radio pioneer and the authority on all things ratings, as a lawsuit brought by Nielsen Audio against Todd Alan Clem (“Bubba the Love Sponge”) gets underway.

The case began in October of 2015, when Nielsen filed suit against Clem for ratings tampering. The specific claim is that Clem, when informed that one of his listeners had been selected as a Nielsen panelist, offered that listener money to manipulate the monitoring.

Ratings, of course, are one of the main ways of measuring a radio show’s performance. The numbers generated are then used to sell time to advertisers, meaning they play a significant role in how radio stations make money as well as how hosts such as Clem are compensated.

It is critical, then, that these ratings numbers can be trusted as largely accurate and free of tampering. An accusation like what Nielsen is claiming would damage their business, as well as that of his employers and anybody who purchased ad time.  Nielsen has been questioned by both clients and ad agencies about the inaccuracy of its ppm system.

Likewise, the accusation that a longtime radio host tampered with the ratings system can be extremely damaging to Clem. While his radio personality is defined by rebellion and a refusal to conform to the rules, ratings manipulation would not only cost him considerable damages at the end of this trial but would make advertisers think twice about buying time on his show.

Little surprise that both sides have lobbed some hefty accusations at one another in the buildup to the trial. Clem counter-sued Nielsen, and his legal team has implied that Nielsen has had incidents before in other markets, as well as problems with quality control.  According to allaccess.com, there is a motion to preclude this evidence from being presented at trial.

Bubba’s team has filed a motion against Nielsen as well, seeking to block evidence of sexual misconduct allegations against a key witness, and to block discussion of Clem’s own prior controversies.

The stakes, then, are rather high for both entities in this coming trial. No wonder that both sides have introduced motions to try and handcuff the other argument and tilt the scales a little more in their own favor. As the trial approaches, both sides are preparing for a real legal battle.

Bubba the Love Sponge Finds Himself In A Political Discussion 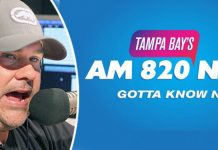